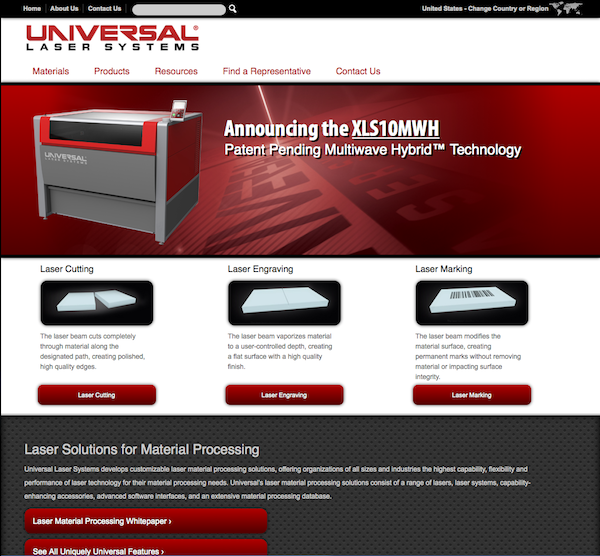 Scott was recruited to the company in 2010 from his Art Institute of Phoenix portfolio show. His first project was to help spearhead the revamp of the company's flagship website.

The ULS website was the fruition of two major efforts. The first was partially undertaken before Scott came on board with Universal Laser Systems. The pages were laid out, but there was not much functionality. It was all also strictly in HTML with tremendous duplicated code. His responsibility was to make the site interact with the customer. So it was transferred to the CodeIgniter framework, popular at the time, but since largely unused. This was accomplished within a few weeks and the site was launched globally to a couple dozen top-level domains in ten different languages.

But, after some reflection, it was decided that the company should be able to manage the website through a database. The company also wanted to add two languages to the list: Slovak and Arabic. The existing languages were Chinese, French, German, Italian, Japanese, Korean, Polish, Portuguese (Brazilian), Russian and Spanish. Finally, the company wanted to advance the longevity of the site, so the decision was made to move the site to HTML5 and CSS3.

But the most dramatic change was in the channel partner site. To help our channel partners with their SEO, we created sites for them on our domain that will have our unified look and feel but have their contact information instead of ours. In a database-driven site, that meant essentially an "overlay" of our site that would sometimes be our site and sometimes be a channel partner's site, depending on how the customer got there. That meant every link had to be capable of keeping them on the right site and the customer had to be served the correct content.

Overall, this international, multilingual site challenged Scott greatly. But thanks to the CodeIgniter framework, we were able to quickly roll this site out from design to development. He built a site that is easy to manage and roll out to all of the company's 21 TLDs (top-level domains).

After the flagship site was done, the next project was the OEM reseller site. The company, which focuses on building desktop and floor-standing lasers, also has an OEM division that allows customers to just buy the laser for implementation into their machinery. This division's emphasis is completely different and requires a separate website.

This site also called for a "configurator" (which the flagship site has, as well). But to keep the potential customer engaged, this configurator was built in jQuery so that the user didn't have to wait for page refreshes each time they changed the configuration. Again, the site was multilingual, so the correct language had to be called. CodeIgniter made this easy and the site was built in a few short months.

The site, which is mostly not driven from a database, also features a login area where customers can save their configurations and compare them. With one click, they can contact the company about a particular configuration and the proper representative is contacted. The customer can also download user manuals and CAD drawings. Finally, the site also allows customers to contact the company's material processing center with a request.

Scott left the company in 2013 for an opportunity with Spear Education.