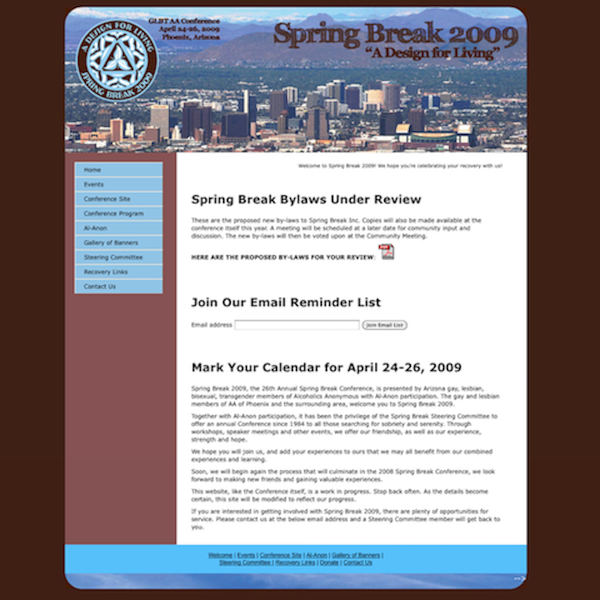 Scott's first website was the Spring Break, Inc. website. He built the original site in 2006 and then constantly redeveloped the site every year up through 2011. This was the site Scott built as he taught himself HTML, CSS and PHP, so it pre-dates his enrollment at the Art Institute of Phoenix. Again, this site is proof of his ability to quickly learn a technology during the development and implement it on deadline.

The site changes every year, as the organization chooses colors and a theme for their annual April event. The website has always reflected those colors and themes over the years. A community-designed logo is also always part of the project.

The site has been through a variety of frameworks as Scott searched for the right solution that would allow him to turn the project over to the committee so they could manage the site themselves. So in 2013, he set out to rebuild the site one last time, in Laravel and Foundation, and use a content management system to manage the pattern of events the site goes through every year.

For instance, the theme and colors are now managed through the database. So the user will be able to use the CMS (which features a built-in color-picker) to change the theme and colors themselves. Previously, this required custom CSS every year. The committee will also be able change fonts, upload the logo and other tasks.

This was a part-time project Scott left in 2014.