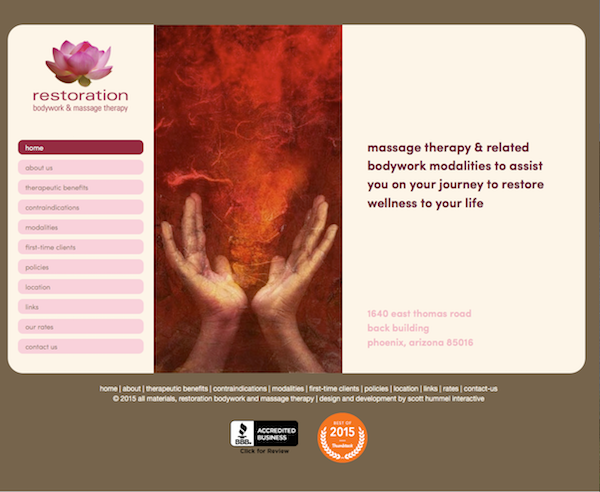 While Adobe Flash is not Scott's strong suit, building this site and a couple of others proved he can learn any framework. In 2009, he approached a friend who had a website for his massage business built with GoDaddy's WebSite Tonight. GoDaddy's limited choice of templates had never pleased his friend, so Scott agreed to work with him to develop a design that would match the company's aesthetics of the Chinese elements.

Flash allows for an almost limitless combination of animations and other interactions. But too much of that can interfere with the use of the site and sometimes comes across as gimmicky. Scott chose to keep the site simple in its animations, so that the user experience was more about the relaxing mood of the website rather than on the developer's prowess with ActionScript 3.0.

So, using a carefully selected palette of stock art, the site was built in a few short weeks. The site has helped satisfied users to be driven to his website. Using Javascript, Scott was able to develop an SEO strategy that worked around Flash's known limitation in internet searchability.

As Flash fell by the wayside, Scott convinced this client that it was time to move in a different direction. So the site was migrated to Laravel, where it remains today. The front end of the website was developed in Twitter Bootstrap. A new design was implemented in 2020.