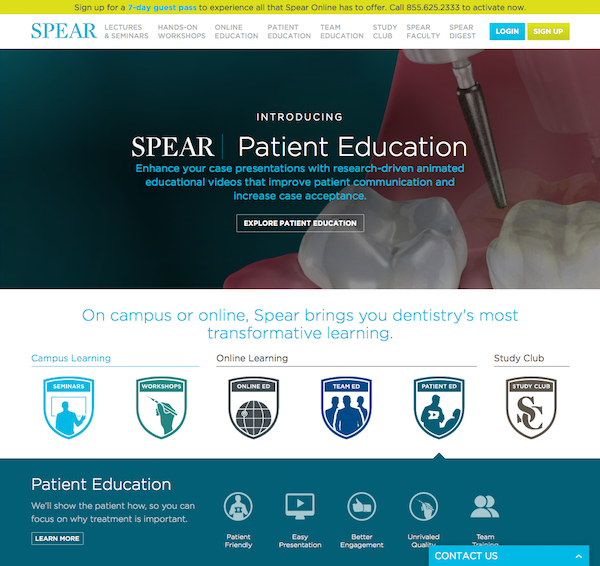 In 2013, Scott left Universal Laser Systems for a larger challenge at Spear Education. This is when he discovered the difference between creating a website and creating a web application. At Universal, all of his work had been on websites, even though some of them had partial content management systems.

Client users are tracked and managed as they progress in their education as dentists. This progress is monitored by Spear and their various needs are served by the application. Employees can track users and run various reports to submit to their supervisors so management can monitor the health of the web application.

This web application was Scott's first exposure to the grandfather of PHP frameworks, Zend. Having quickly learned CodeIgniter and Laravel, Scott was ready to tackle the monstrously large Zend Framework, whose API seems as extensive as the Oxford Dictionary. Sure enough, he was able to pick up the frameworks MVC principles and quickly be up to speed in performing back-end tasks, such as writing controllers or modeling data as he built a number of different components for the application, as well as adding features to existing components.

But his work at Spear also allowed him to return to something he had left behind at Universal — front-end development. Shortly, the company will be transitioning to a responsive framework such as Twitter Bootstrap or Foundation. The exposure to responsive design is sure to build us Scott's CSS chops as he writes HTML that validates to W3C standards.

Scott left Spear in 2016 for an opportunity with More Active, LLC.